After yet another scintillating display from Leicester on Monday night, it’s hard to believe that last season, the Foxes were at one stage odds on for the drop. What’s even harder to believe is that reigning champions Chelsea have plummeted so far this season, with the Blues deservedly going down 2-1 at the King Power Stadium to a Jamie Vary & Riyad Mahrez-inspired home side. 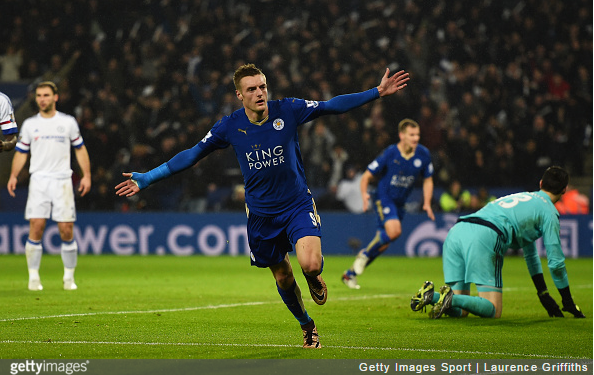 The Foxes were sharp from the off while the Blues struggled, as has often been the case this season, to find their rhythm. The opening goal eventually came on 34 minutes, with Vardy firing home from close-range after more good work from Mahrez. The visitors’ hopes of getting back into the game weren’t helped by the loss of Eden Hazard just after the half-hour mark due to injury.

Soon after the break, Claudio Ranieri’s side doubled their advantage, with Mahrez producing a magnificent curling effort to make it 11 goals and seven assists in the league this season for the outstanding Algerian. Soon after that second goal, Jose Mourinho hauled off John Terry, who had struggled to deal with the Foxes’ pacy attack, sending on Cesc Fabregas. The Blues did improve and eventually got a goal back through sub Loic Remy. However, in the end the west Londonders were no match for their high-flying hosts.

Leicester go back to the top of the table, with a top-four finish at least, looking more and more achievable. Although one wonders how long the shock leaders can hold onto their dynamic duo of Vardy and Mahrez. As for the Blues, they sit in 16th spot, incredibly just one point above the drop-zone. How can a team of such proven, experienced quality fall so fast?