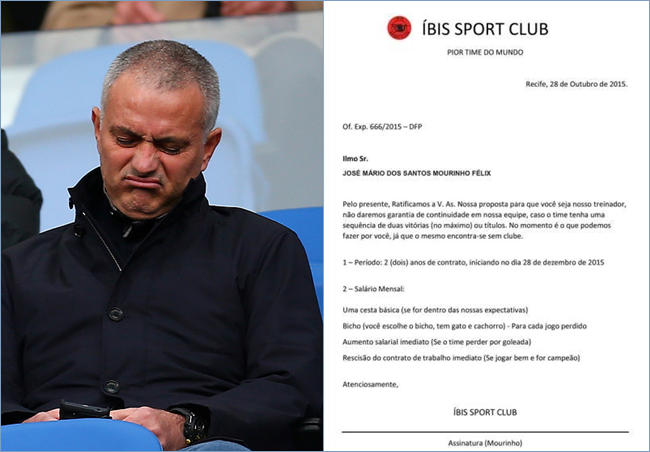 Despite being canned slightly unceremoniously just a few days before Christmas, you just knew that Jose Mourinho wouldn’t be out of work for long.

Indeed, the former Chelsea manager has already been offered a lucrative route back into management by one of the leauding lights in Brazilian football.

Of course, by ‘leading lights’ the club we are actually referring to is Ibis Sport Club of the second division of the Pernambuco regional league – a team who proudly refer to themselves as ‘the worst team in the world’.

Ibis have clung to their claim since setting a world record in the mid-1980s for going the most number of games without a win (55).

As such, the singularly unambitious club want Mourinho to come in and further cement their legacy, offering a lucrative two-and-a-half-year contract to keep things exactly as they are.

According to the scanned image above (which was sent out on the Spanish version of April Fool’s Day, it should be noted), the contract includes a monthly food hamper, win bonuses and a wage increase every time Ibis are soundly thrashed.

There is also a clause that states Mourinho will be instantly and automatically sacked if he manages to win the league.

Sounds like a dream job. Somebody give Alan Curbishley a call.