On Saturday afternoon, Stamford Bridge bore witness to a cracking game between Chelsea and Everton which produced six goals and lashings of late, late drama. And amidst all the action, one Toffees’ fans even managed to nab himself a rather fine souvenir of the clash. 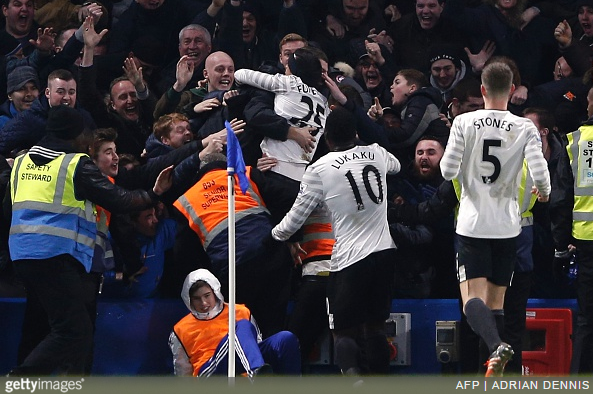 With the game at 2-2 and well into injury time, Argentine defender Ramiro Funes Mori looked to have sealed a win for Everton courtesy of a superb finish from close-range. That goal, unsurprisingly, sparked incredible celebrations among the away fans, with Mori joining in with the travelling support. However, in doing so, the centre-half ‘lost’ his protective headband, which he’s been sporting since he endured a nasty cut in his side’s recent FA Cup clash with Dagenham & Redbridge. And it soon transpired that one light-fingered Everton fan had nicked the piece of headgear…

We are all Funes Mori #EFC pic.twitter.com/hnC9Gfm9so

Alas, it would be Chelsea captain John Terry, who had already scored an own-goal, who would nab a point for the hosts with a last-gasp equaliser. Still, nifty work from the cheeky fan!