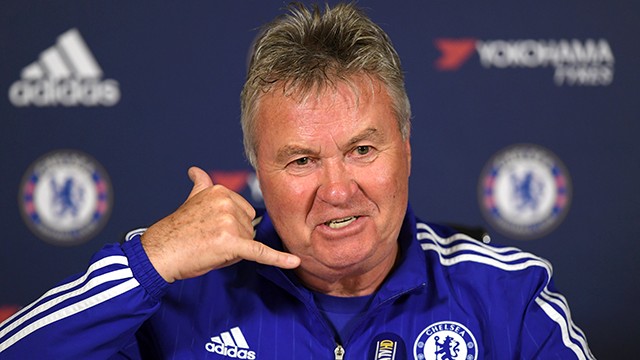 The fractious game (in which Spurs became the first Premier League side to receive nine bookings in one game) at Stamford Bridge ended in a multi-man scuffle at the entrance to the tunnel, in which Hiddink managed to get himself embroiled before swiftly ending up on his backside.

Thankfully, the Dutchman’s years of judo training kicked in and he was able to roll to safety (with the help of four burly stewards)…

Guus is knocked over in the melee at the end of the #Cfcvspurs game pic.twitter.com/ZnOkswW2jv

Anyway, Hiddink’s blushes were quickly spared by an emotional call from Ranieri who, perhaps understandably, was on the verge of tears at the time:

Just after the final whistle, a few minutes after the ‘judo’, I got a call from Ranieri. He called and thanked us for what we did in the second half, and I congratulated him for being champion.

I didn’t see any tears because it wasn’t a FaceTime conversation, but his voice was trembling a bit. He didn’t say much — ‘Thanks’ five times.

The Blues coach then went on to congratulate Ranieri’s side on their momentous season:

Leicester deserve it. It might not be a surprise anymore but it’s a shock for the established clubs that they did so well.

You can be top by surprise after half a season, but they didn’t implode.

There was no tension when they started to smell the title and that’s why I think they deserve it.