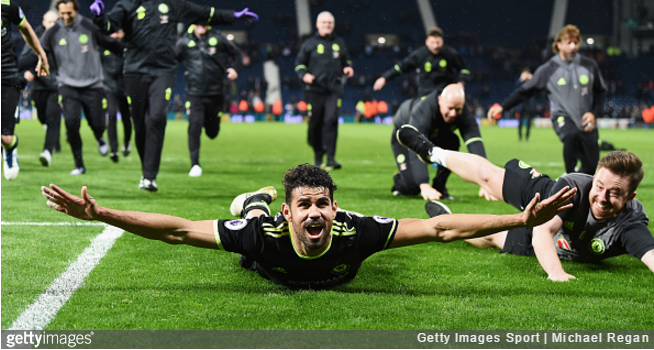 As you may have heard, Chelsea tied up the Premier League title with a 1-0 win over West Brom at the Hawthorns last night.

The final whistle was greeted with mass pandemonium as Antonio Conte and his battle-weary charges celebrated their momentous achievement.

Central to the chaos, as ever, was Diego Costa, who appeared to fully take leave of his senses in the aftermath of the victory.

Along with the obligatory belly slide, Costa also gave John Terry a fitting send-off by vigorously manipulating the departing club captain’s undercarriage right in front of the television cameras…

When the boss walked in! 🍾🍾🍾 #ChelseaChampions #CFC #Chelsea

Then, after Conte had finally managed to towel himself off and emerge to fulfil his media duties, Costa colluded with David Luiz to ‘abduct’ the Italian coach mid-sentence and drag him bag into the melange…

As the miscellaneous fluids continue to be slung around, footage later emerged of the surly striker yelling at a teammate to “f**k off” while attempting to wash champagne out of his eyes with Lucozade Sport…

GREATEST VIDEO OF ALL TIME COSTA IS A FUCKING LEGEND pic.twitter.com/wkmo2dmCim

Language scholars may notice that one of Costa’s Portuguese-speaking colleagues (most likely Luiz) actually remarks “that is not water!” at the end of the clip.

They say success does funny things to people, which is worrying as Costa was more than partially unhinged beforehand.