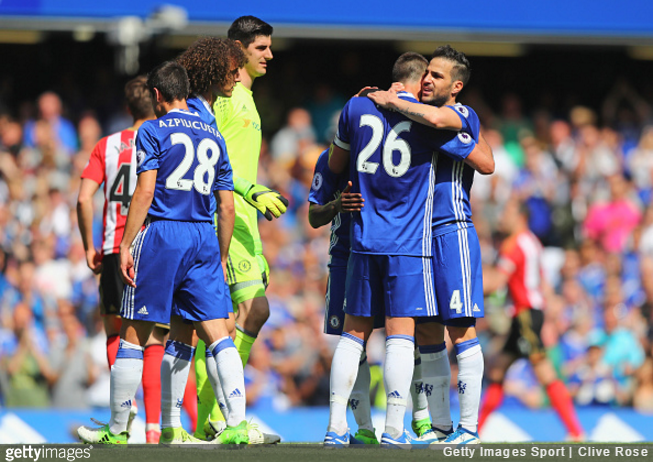 John Terry has dismissed criticism surrounding the manner in which he ended his Chelsea career, insisting he “couldn’t care less” what people think of his contrived ‘farewell’ substitution.

Terry was subbed off in the 26th minute of the Blues’ final Premier League game of the season against Sunderland, as his teammates gathered to clap him off with a mid-game guard of honour.

It was duly revealed that the whole thing was in fact Terry’s idea, with Black Cats manager David Moyes also agreeing before kick-off to have one of his players hoof the ball out of touch at the appropriate juncture.

The charade drew scorn from across the board, with pundits and fans deriding the contrived manner in which the departing captain chose to wave himself off.

However, quite in-keeping with his character, Terry remains entirely unapologetic about his little self-reverential ceremonial interlude (via Guardian):

I couldn’t care less, I promise you. All I care about is celebrating with my Chelsea fans. Me and them have a wonderful rapport and have done for 22 years.

Nothing that people write or say can ever get in the way of that.

I wanted to play 26 minutes because the shirt number means a lot to me and the supporters so as long as they are happy – and I was over the moon with the reception – I promise you I could not care less.

It was an unbelievable send-off from the supporters to help me to celebrate 22 years at the club.

I’m very grateful to them, and it was something I will never forget. It was so emotional after the game, I was in bits.

I, I, I. Me, me, me. Utterly consumed by his own self-mythology.

Honestly, great central defender as he doubtlessly was, we’re not going to miss John Terry the man one iota.