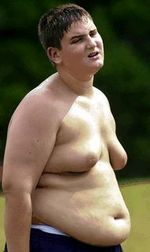 Looks like Frank, aka Eric Cartman, has been demolishing his fair share of pies and cream cakes during his summer holidays. Jose Mourinho won’t be happy to see that his star midfielder has developed such an impressive set of man breasts, or moobs as we like to call ’em. And he could do with a spot of lipo on that wobbly gut. Too much Christmas pudding Frank?
Okay, okay, this obviously isn’t a picture of Fat Frank, but it sure as hell does look like him. If I knew who the kid in the photo was, this would qualify for our shit lookalikes, but I don’t.
Poor Frank – I guess that at least 90% of fans who call him fat are actually much fatter than he is.