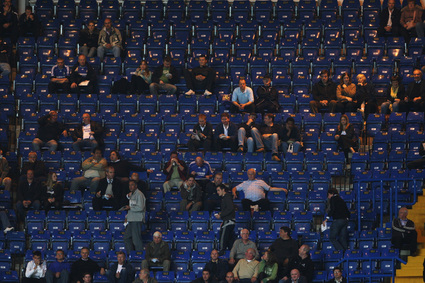 Last night saw Chelsea’s first Champions League game of the season at Stamford Bridge (capacity: 42,055). Worryingly for Roman Abramovich, Jose Mourinho and all concerned, just 24, 973 fans attended the 1-1 draw with Rosenborg, a frankly pathetic turn-out for a club that claims to be one of the biggest in Europe.
Fans of Man Utd, Liverpool and Arsenal must be laughing at Chelsea’s inability to fill their ground for their first big European night of the season. Admittedly Rosenborg are no Real Madrid, but the ground was barely half full. I put this down to a combination of high ticket prices, nouveau ‘come lately’ fans and a less-than-scintillating playing style â€“ of the big four in England, I’d much rather watch Man Yoo and Arsenal play than Chelsea. Hell, I’d rather watch Rafa’s Liverpool, who hardly set the world alight with their style of play either.
Come on Chelsea fans, it’s time to get behind your team and prove that you are genuine supporters.
More Chelsea news and views over at Chelsea Pies (if you can be bothered to click on the link)