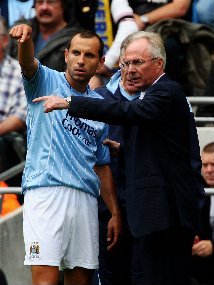 Does anyone else think that it’s funny that the British press seemingly wants Sven Goran Eriksson as the new Chelsea boss? It seems a little more than ironic that the same press who dragged the Swede over the coals for his drab tactics and dour approach whilst at the helm of the England side, seemingly feel that he’s the man to keep Roman Abramovich happy with beautiful free flowing football in the demise of Jose Mourinho’s tenure.
There’s no questioning the fact that Manchester City have seen a rebirth under Ol’ Blue Eyes, but it’s surely churlish to forget how he managed the national side. It seems to me that Eriksson is flourishing at City as he’s allowed free-reign when concerning his side and the football they play. If he went to Chelsea, surely Sven would see the same restraints that possibly held him back in the England job. What do you think?