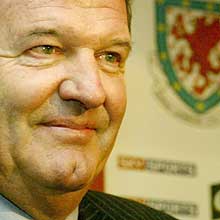 John Toshack is a man who knows a thing or two about being in at the deep end in the world of football. He’s played in the Liverpool side that became one of the most successful teams in history, as well as leading Real Madrid to La Liga. He also knows a thing or two about playing games with the press saying directly translating stock footballing phrases into Spanish that only make sense in the original English… “La Liga es el pan y la mantequilla y la nata es la Copa del Rey or ‘The League is the bread and butter and the Cup is the cream’.
So his attack on Jose Mourinho is all the more peculiar. Despite winning two Premier League titles and three domestic cups during his time as Chelsea gaffer, Mourinho’s departure has been the cause of great debate with Toshack accusing him of ‘throwing in the towel’.

In Toshack’s weekly Marca column, he writes: “The Special One threw in the towel. They say he left 48 hours before the game against Manchester United, taking his reports on Ferguson’s team with him and leaving the new coach and his players high and dry. If that’s true, it doesn’t say much for him. When the going gets tough the tough get going – and Mourinho has disappointed me enormously.”
He continued: “He was very brave in front of the cameras when he had the best goalkeeper in the world between the posts and a backbone made up of Terry, Lampard and Drogba. Chelsea’s problems have not started now without Mourinho but a month ago – with him. The injuries to Drogba, Lampard and Terry have exposed Chelsea. The Portuguese spent a lot of time moaning about those injuries. But when you get injuries a coach has to show his true worth.”
He added: “Under Ranieri, Chelsea finished fourth and second. They played in the Champions League for two successive years. They weren’t exactly a useless side before Mourinho turned up.”
What do you think of all that then? Did Mourinho give up with a whimper or was he pushed without a choice in the matter? Would you have liked to see more fight from the Special One, or should Toshack just keep his nose out?