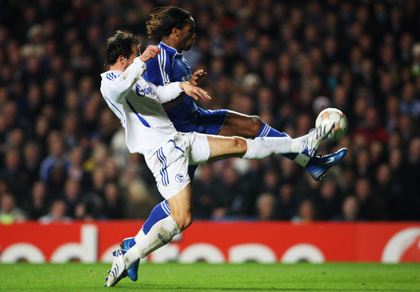 The party line when Roman Abramovich decided to solve a problem like Mourinho was that he wanted his team to play more attractive football â€“ but several games down the line under new management, is there really any difference?
Watching last nightâ€™s game against Schalke you wouldnâ€™t think so â€“ the formation with a holding midfielder and lone striker hasnâ€™t changed, Lampard plays the same role and the long ball was still well in effect.

And, once the second goal had gone in, tactics turned to defence â€“ unlike the Man United and Arsenal games where the teams kept striving forward producing the sort of football that Roman no doubt dreams of.
Revolutions donâ€™t happen overnight and the players are (supposedly) being asked to fix that wasnâ€™t actually broke in the first place â€“ while the new manager must be wary that poor results could see him out of a job.
Have Grant and his new sidekick, Ten Cate, done anything to bring the beautiful game to the Bridge and do Chelsea even have the players to compete playing sexy football?