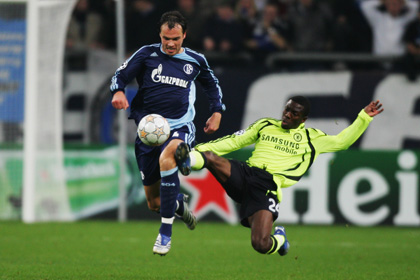 Chelsea avoided defeat by the skin of the postâ€™s paintwork as they weathered a storm of Schalke attacks last night, although they still only need one win from two to qualify.
After a bright start the ball spent most of the time in the Bluesâ€™ half with Helko Westermann causing Juliano Belletti all sorts of problems and, to make matters worse, Petr Cech needed to be replaced because of a calf injury at half time.
We were hoping to see the new and improved Chelsea but sexy football took a cold shower for the evening and they looked happy just to hang on by the end, which nearly cost them when sub Peter Loverkrands hit the upright in the 87th minute.
Was Chelsea’s play just European pragmatism or have they gone back to the ‘boring board’?