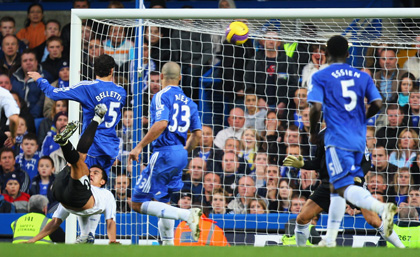 There were some great goals scored at the weekend â€“ Fernando Torres touch of class from the sub’s bench and Ronaldo’s finish from an exquisite Tevez pass come to mind â€“ but we’re suckers for an overhead kick.
Everton’s Tim Cahill shielded a cross from MacFadden and, with the ball hanging in the air, swivelled to excute a perfect bicycle kick. It wasn’t just Cahill’s acrobatics that earned our vote but the perfect timing of his 90th minute strike that gave Everton a point after being under the cosh for most of the game â€“ ‘Aussie rules football’.
Let us know if you think there was a better goal scored at the weekend