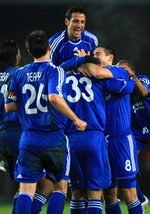 Chelesa win Group B with this mightily impressive away victory. Many experts thought there could be a shock on the cards in Norway, but that never looked like happening, as Avram Grant’s team cruised to a 4-0 win.
No.1 What was up with Rosenborg? Most of their players started as if they had been on the lash the night before. The league season is now over in Norway, so perhaps that had something to do with the fact that Rosenborg were so jaded and lacking in sharpness.
No.2 I’ve already mentioned the good club form of Gareth Barry and Scott Carson, which is totally at odds with their international form. The same can be said of Sean Wright-Phillips, who had a fine game until he was taken off on 68 minutes. More damning evidence against Steve McClaren.
No.3 It’s all gone quiet on the Avram Grant front â€“ every football journalist had his ‘Grant is no Mourinho and must goâ€¦’ piece half-written before Chelsea had even played a game under him, but the Israeli has hardly put a foot wrong so far.
Watch Didier Drogba’s second goal after the jumpâ€¦