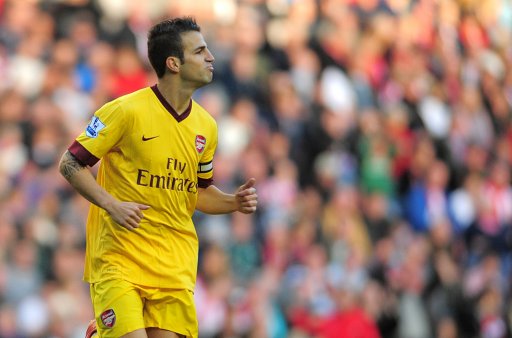 Arsenal captain Cesc Fabregas has been ruled out for three weeks after, once again, twanging that darn hamstring during the Gunners’ Premier League game with Sunderland on Saturday.

Fabregas, who now joins Theo Walcott, Robin Van Persie and Nicklas Bendtner on Arsenal’s growing list of crocks, was forced to limp off the field with barely half-an-hour of the game played, having already fortuitously opening the scoring in the 12th minute.

“Arsenal Football Club have confirmed that Cesc Fabregas will be out for two to three weeks. The extent of the injury was discovered after a scan on Monday.”

The Spaniard will definitely miss Arsenal’s Carling Cup derby with bitter rivals Tottenham tonight (although, in truth, he’d have probably been rested anyway), and also looks set to miss out on their showpiece Premier League clash with rivals Chelsea on October 3rd.