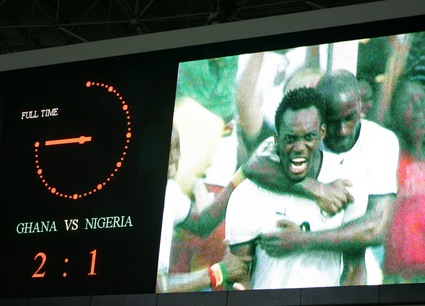 It’s clear that Ivory Coast are by far the strongest team at the Africa Cup of Nations. They destroyed Guinea 5-0 in the quarter finals, and will surely get past either Angola or Egypt in the semis.
The only man who can stop them from lifting the trophy isâ€¦ Michael Essien. He has dragged Ghana to the semi finals (they will face Tunisia or Cameroon), almost single-handedly, and is the only player left in the tournament who can stand up to the might of Chelsea team-mate Didier Drogba and his fellow Ivorians.
In an earlier post today, I cited Essien as Chelsea’s most valuable player, and this tournament has reinforced that opinion. Ghana are a strictly average team, but now they have momentum, and that’s down to the inspirational leadership of Essien. With the home crowd now behind them, Ghana can overcome the Ivory Coast in the final. You heard it here first.
Ghana 2-1 Nigeria – watch the goals after the jumpâ€¦