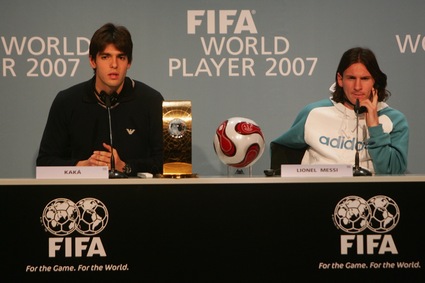 If you believe the newspapers, Roman Abramovich has set aside a Â£100m transfer fund to bring in new players in the summer. That can buy at least five or six world-class talents (or one Cristiano Ronaldo). Which players should Avram Grant (or Frank Rijkaard, or whoever’s in charge of Chelsea then) have at the top of his list? And which deadwood should the club get rid off to help offset the cost of any new faces?
Grant said in a recent interview with the Daily Star: “We want to be more consistent and of course I need players who can help with this… Will it take a flair player like Kaka or Messi? I will not reject that one of those names will be here… Will they come? I think so, yes. This is a big club.”

I can’t see that Chelsea have a hope in hell of signing either Kaka or Messi, rated two of the world’s best players. Maybe they should set their sights a little lower. A few names they might consider:
Klaas-Jan Huntelaar (Ajax) The Dutch striker has been described as the next Van Basten. He’s not that good, but he’s good enough for Chelsea.
Diego (Werder Bremen) A wonderfully creative Brazilian midfielder. Deserves a bigger club than Werder.
Mario Balotelli (Inter) Very gifted young striker. Still only 17 and could be tempted by the promise of more first-team chances than Inter can give him. He’d be a better long-term bet than Shevchenko (ha) or Salomon Kalou.
Micah Richards (Man City) Versatile, powerful young defender. Won’t be at City next season, and Chelsea are known to be interested.
Jermaine Defoe (Portsmouth) Proved his class at Pompey and could be in line for a move back to London.
Franck Ribery (Bayern) Seems happy in Germany, but could move if the price was right. Would be a better option than Florent Malouda. See also Bayern striker Luca Toni, who would be a much better option than Claudio Pizarro.
Daniel Alves (Sevilla) The highly rated Brazilian full-back has fallen off the radar in recent months, but Chelsea must still be keen on him.
David Villa (Valencia) How much longer will Villa stay at struggling Valencia? If they go down, he’ll almost certainly end up in England next season. Chelsea will have taken note of Fernando Torres’s success and may believe Villa can make a similar impact.
David Bentley (Blackburn) Improving all the time, but would his career stall at the Bridge, like other English talents? (See Shaun Wright-Phillips, Scott Parker, Steve Sidwell etc.)
Dimitar Berbatov (Spurs) Berby’s agent seems like the type of chap who wouldn’t be afraid to sell his own grandmother, so I wouldn’t be surprised to see Chelsea (and Man Utd) sniffing around the Bulgarian maestro.
Luka Modric (Dinamo Zagreb) Very highly rated Croatian midfielder, who orchestrated England’s downfall in the Euro 2008 qualifiers. WIll surely leave Zagreb for a big Premier League/Primera Liga/Serie A club this summer.
And a few current Chelsea stars who might be sold to pay for the above:
Andriy Shevchenko, Claudio Pizarro, Tal Ben Heim, Steve Sidwell, Michael Ballack, Florent Malouda, Salomon Kalou
Discuss…