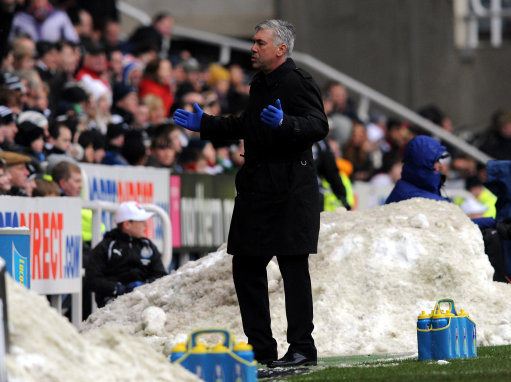 With his side surrendering their position at the summit of the Premier League for the first time in eight months, Chelsea manager Carlo Ancelotti has admitted that he is losing sleep over the club’s current slump – a wobble in form that has seen them win only one of their last six games (their worst run of form in a decade).

After Chelsea’s 1-1 draw with Everton on Saturday, Ancelotti told the PA:

“I’m not relaxed at all and I don’t sleep well. I maintain confidence in my players. I maintain trust. But it’s not a good moment, not for them or for me.

“It’s a moment in which we are all not doing enough to win games. We have to do more because this is the only way that I know.”

When pressed on his immediate future at Stamford Bridge, Ancelotti added:

“I’m not worried about my job. I know we have to play better and get better results. But it’s the decision of the club and I don’t feel pressure over this.

“Rather, there are lots of other things to worry about: we are not playing well or having good results, and we are no longer at the top of the table.

“In my career I have been through lots of difficult moments but I know that the way out of them is to stay together and work hard on the training ground. We still have the time to come back and play our football, to come back and be competitive in the league and in the Champions League.”

A mug of Horlicks and a cheeky Nytol and you’ll be right as rain Carlo, although I admit that an afternoon spent watching Salomon Kalou ‘try his bestest’ is enough to keep anyone awake at night.