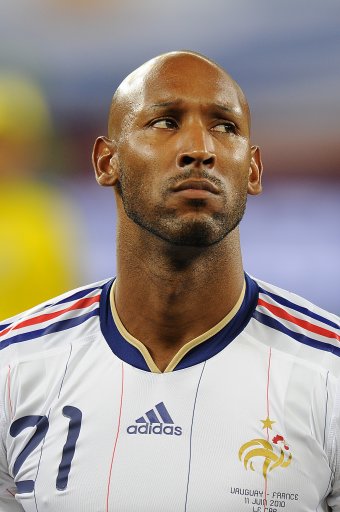 Chelsea striker Nicolas Anelka has played a big, bad ‘R’ card in defense of his actions at the World Cup, claiming that the majority of the French population have been far too willing to revert to racism in attempting to weed out the culprits for Les Bleus‘ capitulation in South Africa this summer:

“People said there was a clan of black players in the French squad at the World Cup and we then saw the true face of France. When the France team fails to win people start talking straight away about the players’ skin colours and religious beliefs.

“When times get tough we find out what people really think. They said Franck Ribery had hit Yoann Gourcuff – Ribery the Muslim, and Gourcuff the good French boy.”

Anelka also admitted that he is still galled by the fact that, due to a series of high-profile fall-outs with the FFF hierarchy, fans of the French national side have been left with an unfairly skewed impression of him:

“People in France have a false picture of me. Everything I have achieved has been abroad. I am not ‘made in France’ – that’s the place I have had nothing but trouble.

“The fact I grew up on a high-rise estate counted against me. I was the first player from this background to own a Ferrari, and this sent people crazy.

“I have never wanted to sing the national anthem with France. Had they insisted I’d have refused, and quit playing for them.”

Bold stuff from an essentially bald man. You’ve got to admire his conviction if nothing else.