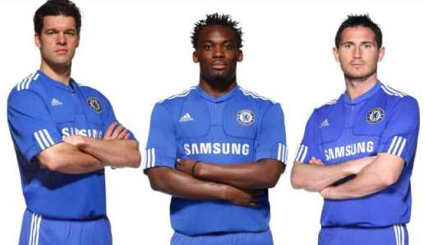 This is Chelsea’s new home kit for the 2009/10 season. It’s made by Adidas, it’s sponsored by Samsung, and it’s still blue (with white stockings) – in other words, it’s pretty damn similar to the kit Chelsea have been wearing this season.
Talking of this season, Chelsea will debut this new strip on Sunday 17 May, when they play Blackburn Rovers at Stamford Bridge. Because it’s all about the Benjamins.
Do I like the kit? Um, it’s OK, I guess, if you like your shirts to look mildy futuristic yet also dated. It looks like a Chelsea shirt, and that’s the point, after all.
Check out a full-length picture of the new kit (WARNING: may contain traces of Salomon Kalou)…

The new kit goes on sale on 14 May, or you can pre-order it from Chelsea’s online Megastore.
Premocracy: Do you like Chelsea’s new kit? Vote below: