Blue is the colour at Wembley today 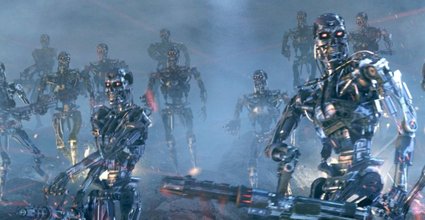 What it looks like to face Chelsea
I’m not expecting much entertainment from today’s FA Cup Final, the 128th in the competition’s history (stat fans) -Â and the sun is shining madly in London, so I probably won’t even watch it live (it’s been a manic week of football anyway, and I’m a bit footballed out).
Here’s how I see it: Chelsea, a gang of mercenary Terminators, play direct, unattractive football; Everton, as The Guardian‘s Barney Ronay said not so long ago, play much like Chelsea, only they’re not as good.

This points to a grindingly dull, physical game, probably 1-0 to Chelsea or decided on penalties, in which case I wouldn’t trust Chelsea’s luck.
What I do know is that both teams deserve one trophy this year. Chelsea somehow got within a sniff of winning the Premier League and beating the mighty Barcelona, while Everton were the pick of the non-Big Four, again.
I’d rather Everton walked away with the FA Cup, as I’m a huge fan of David Moyes, if not always his pragmatic style of play; the way he coped with the loss of several of his squad’s strikers was on object lesson in management. But I wouldn’t begrudge Guus Hiddink a silver pot in his last game in charge of Chelsea, nor Lampard, who deserves something more than cash for his sterling efforts.
TEAM NEWS
Chelsea Super Frank Lampard is fit to start, while Julio Belletti and Alex have recovered from a virus. Which leaves Chelsea at full strength. A word for Ashley Cole, who could become the first player in more than a century to pick up five FA Cup winners medals.
Everton Phil Neville and Steven Pienaar have both been cleared to play, so apart from a couple of long-term absentees (Phil Jagielka being the biggest loss), Moyesy can pick from his usual squad.
PREDICTION
The teams drew 0-0 in both their league encounters this season. However, on a scorchingly hot day in north London, I think this will have at least one goal -Â it’s been a long season and players will tire in the second half, meaning the game will open up. Chelsea is the stronger team and I tip them to sneak it with a second-half strike. Chelsea 1-0 Everton