Almost everything you need to know about Chelsea’s new gaffer 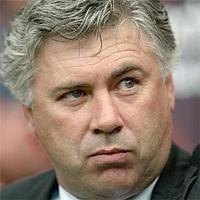 1. After a Vespa crash as a teenager, Carlo’s left eyebrow was left permanently arched (see photo). Sometimes he arches his right eyebrow on purpose, to appear symmetrical.
2. Carlo speaks better English than Big Phil Scolari and Ray Wilkins, but not as good as that spoken by Super Guus Hiddink.
3. Carlo is Italian, like a pair of tasselled leather loafers.

4. Carlo played in midfield for Parma, AS Roma and Milan, from 1976-1992.
5. Carlo was capped 26 times by the Italy. So he could play a bit, clearly.
6. Carlo will bring Andrea Pirlo to Chelsea, but Pirlo will turn out to be a flop – it will be Scolari and Deco (i.e. a vanity signing) all over again.
7. Carlo is an occasional smoker, though he’s trying to quit.
8. Carlo’s daughter Katia has spent time recently at Chelsea working on her PhD thesis, which compares the media and marketing relations between Chelsea and Milan.
9. Carlo is one of only six gaffers to win the Champions League as both a player and a coach.
10. Translated into English, Carlo’s name means “Charles Biscuits”.
* A couple of these “things” may not be true.