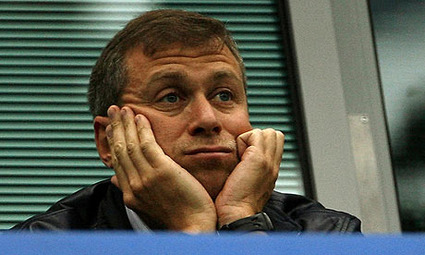 Chelsea’s billionaire owner, Roman Abramovich, has just bought a Â£288m yacht, with built-in missile defence system. He could have got almost four Cristiano Ronaldos for that. Except…Â C-Ron would never have signed for Chelsea.
I wouldn’t be surprised if Roman bought the yacht to cheer himself up, because he must feel like every star player he wants to bring to Chelsea rejects him.

Steven Gerrard said no. Kaka said no. Ronaldinho said no. David Villa said no. Even Glen Johnson, who once played for Chelsea, chose Liverpool over his old club. And it seems more than likely that Carlito Tevez will choose Man City instead of Chelsea. Deco and Ricardo Carvalho want to leave too, not that they will be badly missed.
Manchester City is the hot new destination for those mercenary footballers who feel that Â£60,000 a week is just not enough cash. Which leaves Chelsea in a spot of bother.
Gerrard, Kaka and co. snubbed Chelsea for the simple reason that the club is universally disliked, and no one craves unpopularity, except for Michael Ballack, who doesn’t care what people think of him – he is German and therefore unpopular by birth.
John Terry reportedly wants Abramovich to splash out on Franck Ribery, but it seems the Frenchman favours Real Madrid. And put yourself in the Frenchman’s shoes: Barcelona, Real Madrid and Man Utd are also chasing you. Who would choose Chelsea from that group?
Now Michael Essien’s agent has issued the following statement:

“Some clubs are interested in Michael… He likes Chelsea very much but football is football and if Real Madrid, Barcelona or some other club make an offer, he needs to sit down and discuss what is best for him.”

I’m sure Essien will stay, but it’s hardly what Abramovich and Ancelotti want to hear right now.
And therein lies Chelsea’s problem. They have the cash, but not the stature to compete with Europe’s historically big clubs. If Chelsea were a second-tier club, competing for second-tier players against the likes of Aston Villa, Everton and Tottenham, they would find it much easier to make fitting signings. Perversely, because they have more money than those clubs, they find it extremely difficult to attract quality players. And what use is cash when you can’t spend it? Oh well, at least the manufacturers of obscenely expensive super yachts are happy to take Roman’s money.
[A version of this post first appeared @ BigSoccer]