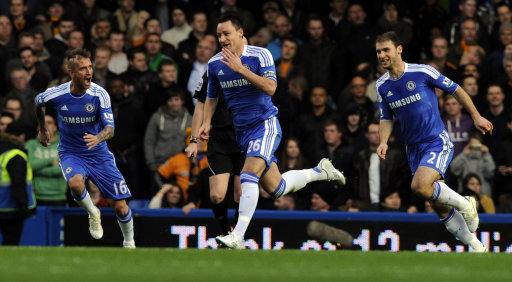 John Terry and controversy are old friends at this stage, aren’t they? His Chelsea boss Andre Villas-Boas has now denied that his captain  got booked on purpose against Wolves at the weekend.

JT was on four bookings and therefore just one away from suspension, when he was cautioned by referee Lee Mason for taking way too long over a throw late on in the game. That means that the England man now only misses tonight’s Carling Cup game against Liverpool rather than next weekend’s league clash with Newcastle United.

AVB said: “Terry got a yellow card from a throw-in. Ashley Cole was looking for the best options and couldn’t find any so Terry’s out on Tuesday. It wasn’t a deliberate yellow card as they’re not allowed by UEFA. Frank Lampard was also on four yellow cards and we didn’t force it.”

The fact that, after receiving the yellow, JT didn’t even take the throw, does make it look like a a clear case of gamesmanship to me, but is AVB right?