Peter Schmeichel has been talkling to us at the launch of HTC’s UEFA Collectors Edition ‘Champions’ handset.

And he gave us a pair of his signed goalkeeper’s gloves to give away to Pies readers. 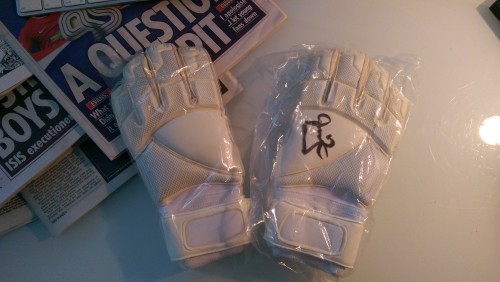 Before that, a few words from Peter:

Which striker did you most fear in a one on one situation?

I never feared any strikers as such, but the best ones who I respected most in my playing years were Shearer and Fowler.

Who or what inspired you to be a goalkeeper?

Inspiration came from not being a particularly good outfield player, so the coach thought it was safer to put me in goal.

What was your best career save? Which game, which player?

I made a save against Zambrano from Inter at Old Trafford. He should have scored in an empty goal but I came flying across and managed to get a hand to it. The importance of the save is what makes it the best in my mind.

The UEFA Champions League final was your last ever match for United. How did that feel? Were you aware of that when you came out of the tunnel at the Nou Camp?

I was aware of it and I made the choice myself that it would be my last ever game for United. It felt fantastic to leave Manchester United on such a high.

Sherringham or Solskjaer? Which was the best goal in the ’99 final?

Both were massive goals, Sherringham’s to keep us in the game and go to extra time, and Ole’s because it won us the Champions League, they really can’t be separated.

How did it feel to captain the team that day?

It was one of the proudest moments in my career, the last thing I did as a Manchester United player was to lift the Champions League trophy, that’s what dreams are made of.

None, it was only ever Manchester United for me.

What’s your favourite UEFA Champions League moment of all time?

Winning in 1999, nothing could ever beat that.

How do you think technology has influenced or changed football?

Technology changes everything whether in sport, in healthcare or in whatever field you like. But it’s not always for the good. When it comes to sport, some introductions of technology have been beneficial, but others have not. Sport is in essence, human beings challenging other human beings, chasing inches or seconds, but it’s also the not getting there – or human errors, and if you take that element out of sport by using technologies available, to my mind you ruin sport.

What do you get asked for more these days? Autographs or selfies?

Who would make your all time UEFA Champions League 11?

All of them are multiple winners of the UEFA Champions League and I was fortunate enough to play with two of them, Giggs and Scholes.

Giggsy is a legend, he was the best and most influential player of the premiership era to date. To play at a consistently high level for 22 years is extraordinary and his professionalism on and off the pitch made him a role model for many young footballers.

Paul Scholes controlled and distributed the ball better than anyone else I have ever seen. He always knew what the best pass should be and what the game needed at any given moment, he was a genius on the pitch, teams feared him and he gave Manchester United an edge.

Sir Alex has said that he regretted not signing Frank Lampard earlier in his career and I can understand that. He has had an unbelievable career and smashed Chelsea’s all time goal scoring record, all from the midfield. He’s still playing at the top level and has been incredibly successful with Chelsea.

John Terry is the most successful captain Chelsea has ever had. He gives his heart and soul each time he goes out on the pitch and that is something I really admire. As with Lampard, his success at team level is tremendous and he fully deserves to be honoured at the highest level.

Steven Gerrard has vision and technique. He is a fantastic player who has driven the recent success of Liverpool. He can single handedly turn a game around like he did in the UEFA Champions League final that night in Istanbul. He is professional and a great role model for kids today.

What’s the one piece of advice you would give your younger self when you were starting out in the game?

It’s all about attitude and professionalism. I would tell myself to be careful how you act, both on the pitch and in public, and play each game to the best of your ability. If you combine those attributes with your talent, then you will succeed. Also to remember that it is a team game and you should trust and respect your teammates and play for them as much as yourself.

And now, with all your experience, what would you tell kids wanting a career in football?

I would tell any young footballer the same thing. If you want to succeed you need to be dedicated. It is essential to work hard and to trust and listen to your coaches. You need to be smart too, to learn about the game and learn as much about your opponents as possible. The should also take every opportunity to watch and learn from better players, those with real experience and success, that can help you improve and become a better footballer.

What are your top three tips for anyone wanting to become a great goalie?

Firstly it’s really important to learn to catch the ball at speed and at many different angles, you need to be agile and have really quick reactions. There aren’t many goalkeepers that play the ball out, it is something that will give you and edge and you’ll gain confidence from knowing you have the ball control and ability to play out to your team and move the ball forward. Finally I would recommend developing a thick skin. You’ll get equal amounts of praise and criticism and need to learn to take the good with the bad. As a goalie you can come off the pitch either a hero or the villain, you can be blamed for losing a game and get a lot of stick for that from the media and fans.

If you could sum up your football career in three words what would they be?

Peter Schmeichel talked to us at the launch of HTC’s UEFA Collectors Edition ‘Champions’ handset.

To stand a chnce of winning Peter’s signed gloves ‘LIKE’ us on FACEBOOK and add your name in the comments below.