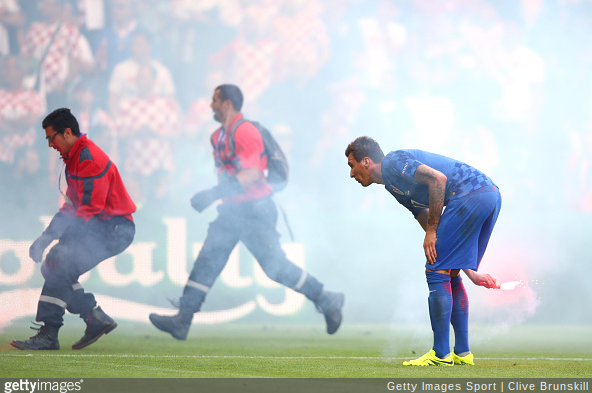 As you no doubt witnessed, the final stages of last night’s Euro 2016 group tie between Croatia and Czech Republic had to be temporarily suspended when Croatian fans bombarded the corner of the pitch with flares and smoke grenades.

While the Croatia players pleaded for calm, one steward had an extremely near miss when an errant firecracker went off in his face as he attempted to clear the pyro-debris from the turf.

The prolonged interruption then seemed to backfire on Croatia, who lost momentum and went on to concede a late penalty to draw the match in the third minute of time added-on.

After the match, Croatian officials lined up to deride the fans responsible, with head coach Ante Cacic branding those who had thrown flares as “sports terrorists” while the Croatian president offered a sarcastic “bravo” in a message posted on Facebook.

However, it would appear that, rather than being solely idiotic and/or randomly violent, there is a bit of context to be factored in here.

Croatian football journalist Alex Holiga emitted a series of Tweets to explain (without excusing) the actions of the fans, who it’s claimed sought to disrupt the match as a desperate protest against the way the Croatian Football Federation is being run.

To be clear – of course I don’t support or condone people doing this and there are now ‘buts’ about it. However…

However, these people aren’t doing it because they hate Croatia. They hate what #CRO footbal has become so much that they don’t care.

Croatian football is run by a criminal, Zdravko Mamić, and his puppets. They are hypocrites, fake patriots and thieves.

None of that is an excuse for the so-called ‘fans’, but you have to ask yourself one question: how has it come to this?

Are these people enemies of the state or something? Of course not. Why has the federation/society let things escalate so much?

I think Croatia will be disqualified from the WC 2018 qualifiers.

While it’s impossible to condone the action of the Croatian fans responsible (that poor steward nearly lost an ear), it’s perhaps easy to understand their growing desperation.

Still, there has to be safer, less haphazard ways to affect change.