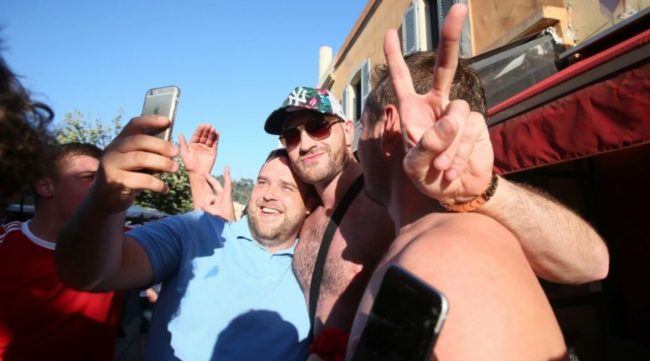 Having pulled out of his World Heavyweight title re-match with Wladimir Klitschko this weekend due to a sprained ankle, Tyson Fury made a bee-line for the south of France to watch England play Iceland in Nice.

Hardly the most cultured of souls, Fury ingratiated himself with the fans already gathered in the city’s old town district with a customary gesture – by shelling out on a mammoth round of drinks for all and sundry.

Tyson Fury has bought €1000 worth of Jager Bombs for England fans in Nice! pic.twitter.com/fyN4QgJGj4

He then led the pink, cargo-shorted masses through the streets like some kind of modern day Pied Piper, chanting as they went…

So the pied piper of modern English fans of #EURO2016 is none other than @Tyson_Fury taking fans in #Nice walking pic.twitter.com/Ljk6bltKmC

The boxer duly posted a photo of his bar receipt on Twitter, revealing that he’d forgone the wine list to blow €1,000 on a couple of hundred Jägerbombs for his adoring public…

Today was a very fantastic day for me & all the fans that support me, we had a ball in nice, #fury&myfans. Epic day. All or nothing