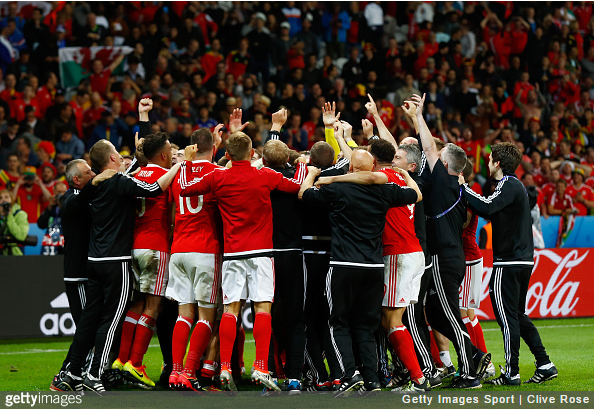 Wales went a-rollicking into the semi-finals of Euro 2016 tonight with an outstanding 3-1 victory over Belgium in the last eight.

One again, the win was a result of the Welsh ensemble’s enviable collective spirit, which has been percolating nicely since the start of the tournament.

However, things got off to a slightly rocky start when Radja Nainggolan put Belgium ahead in the 12th minute with a shot hit so hard it almost ended up in Hill Valley, California, circa 1955…

It didn’t take Wales long to restore parity, with captain Ashley Williams (who defied a doctor’s recommendation not to play due to his knackered shoulder) fixing his eyes on Aaron Ramsey’s 30th-minute corner and planting a firm header past both Thibaut Courtois and Kevin De Bruyne on the line.

The game then to’ed and fro’ed for ten minutes either side of the interval with Joe Allen in particular getting through a fair old amount of nitty-gritty until Hal Robson-Kanu alleviated the pressure by nudging Wales in front in the 55th minute with a goal of the highest calibre.

Robson-Kanu, whose willing runs up top had been an intrinsically important ‘out’ for Wales’ compact defence, deployed a Cruyff turn so deft it left three bamboozled Belgian defenders having to queue for tickets to get back into the stadium…

Belgium then rallied as best they could and came very close to gathering the momentum necessary for a late comeback, only for substitute Sam Vokes to put the result beyond any doubt in the 85th minute and all but seal Wales’ place in the final foursome.

It was Chris Gunter who went barrelling down the touchline before slinging an inviting ball into the box, only for Vokes to power across his man and glance home a header from a full six yards ahead of the front post.

What a performance. What a team.

Majestic stuff, though not quite as majestic as Joe Ledley’s now-customary victory jig…

And with that, Wales have now won as many knockout games in the past week as England have managed in the past two decades.

Could it be that the balance of power is shifting/has shifted?

And you know what? We really rather fancy them to turn Portugal over in the semis too.