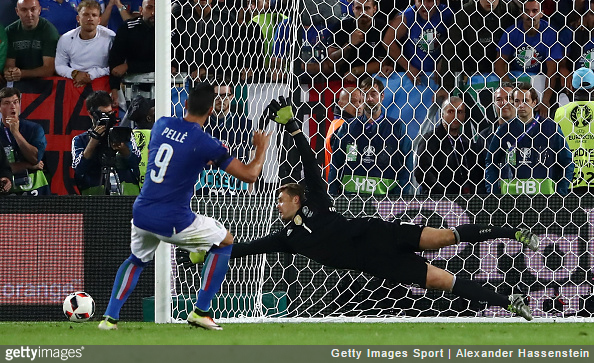 Graziano Pelle has taken the time to apologise to the entire Italian nation for filing a truly wretched penalty kick during the Azzurri’s Euro 2016 quarter-final shoot-out defeat to Germany.

Pelle’s woeful miss was made all the worse by his little display of hubris before the kick, with the striker instructing Manuel Neuer that he was planning to dink the ball down the middle by way of a cocky hand gesture. Safe to say, it didn’t pan out that way.

Having since realised the error of his ways, Pelle poured his heart out to Gazzetta dello Sport, issuing an “apology to all Italy” in an attempt to atone for his sins.

The “scoop” gesture? I did not mean to insult anyone. I didn’t want to seem like a blowhard, I just wanted to subdue him (Neuer).

When we looked into his eyes, Neuer didn’t even notice the adrenaline we had.

I’m sorry for those people who love me and for all Italians, I apologise.

The next day was sadder still. If I’d have scored they would tell me that I was a phenomenon and instead it went wrong.

My one positive of Euro 2016? When it began I was a nobody (in the Italy team) and now I leave feeling like I’ve arrived.

Bless his little cotton socks. It’s not really like he has much to apologise for, either.

The fluffed penalty aside, Pelle proved to be a great spearhead for Italy at Euro 2016 – excelling in that tricky, often isolated target man role and scoring a couple of important goals as he went.

Whisper it, but we think we’re willing to forgive him.