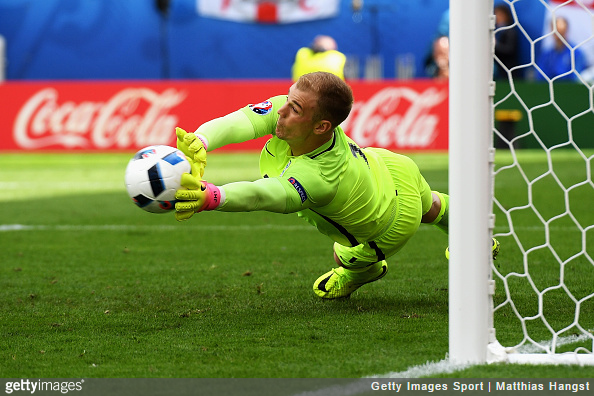 Having failed to stop a couple of shots at Euro 2016, Joe Hart’s position as the tippy-top goalkeeper for club and country is once again being heavily debated.

Indeed, the latest to stick his oar in is one Fabien Barthez, with the former France No.1 arguing that Hart’s sub par diving technique and questionable athleticism have left him lagging behind the likes of Manuel Neuer, Thibaut Courtois and Hugo Lloris in the ‘world class’ stakes.

He isn’t flexible and doesn’t come out. When he runs, it’s just ‘thud, thud, thud.’

He messes up because he doesn’t attack the ball’s path, meaning his hands are then pushed back by the impact with the ball.

Hart is two levels below Neuer, Courtois and Lloris.

Yep, and his kicking is frequently suspect too. And his composure. The sooner Jack Butland is phased in, the better.

The ex-Manchester United baldy also posited that Hart’s shortcomings are deep-rooted within English football’s antiquated approach to training up goalies.

It’s heavy. I don’t understand the English culture around the position. They need huge guys, but they’re just walls that don’t come out.

Clubs and the FA need to change their philosophy in developing goalkeepers.

Little does Barthez know that, while the rest of the world are fannying around with their fashionable dinky goalkeepers, the FA are secretly breeding a humungo-keeper who stands eight feet tall and measures 8 yards across in the labs beneath St George’s Park.

We’ll see who’s laughing when, come Euro 2032, Johnny Cuboid is blocking every single shot on target without having to move a muscle, won’t we?