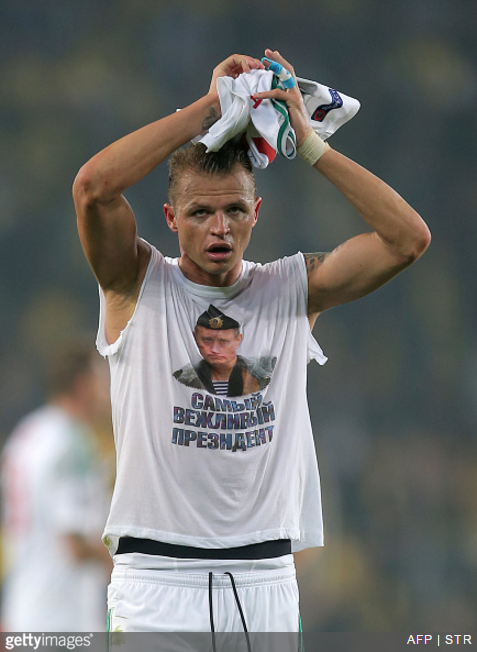 Lokomotiv Moscow midfielder Dmitri Tarasov did nothing for international relations between Russia and Turkey by unveiling a very dubious t-shirt to the Istanbul crowd after last night’s Europa League game against Fenerbahce.

Tensions between the two countries have become increasingly fraught since Turkey shot down a Russian jet back in November.

In a bid to presumably rile the home fans, Tarasov removed his Lokomotiv jersey to reveal a t-shirt that proclaimed Putin to be “the most polite president”.

The BBC report that Lokomotiv are now likely to face stern punishment as UEFA have a zero-tolerance policy on political statements being made during matches.

However, Tarasov defended his actions before declaring his undying support for Russia’s ever-loveable scamp of a president:

It’s my president. I respect him and decided to show that I’m always with him and prepared to give my support.

What was written on that shirt was everything that I wanted to say.

While proclaiming Putin to be the most polite president is hardly the most venomous political taunt Tarasov could have displayed, the barb is obvious and deliberate and really has no place in an already highly charged sporting environment.

We can only imagine that a strongly-worded letter from UEFA will be waiting on the doormat by the time he gets home.