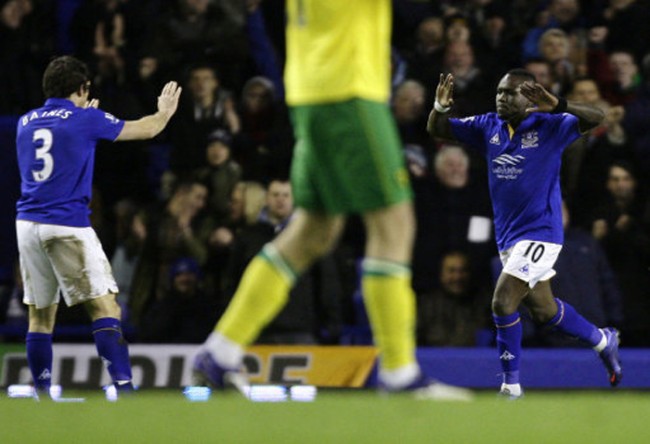 Dutch wideman Royston Drenthe rescued a point for Everton at Goodison Park after the Toffees had failed to make their dominance count against Norwich City.

Despite looking the more likely to open the scoring, David Moyes’ side succumbed to a strike from the in-form Grant Holt. The burly hitman (I never tire of that phrase) produced a superb moment of instinctive finishing, swivelling and shooting in a tight space to put the Canaries a goal up on 28 minutes. However, the striker was lucky not to see red soon after when he seemed to direct an elbow in the direction of Marouane Fellaini after the Belgian had fouled him. However, referee Lee Probert decided not to book either player.

Everton continued to look for a goal although Norwich themselves had a couple of chances to finish off the Toffees. However, just when it looked like the visitors would return to Norfolk with all three points, on came Drenthe to rescue his team. The Real Madrid loanee’s low strike was diverted past John Ruddy and into the back of the Norwich net by Leon Osman on 82 minutes to level the scores while the Dutch star also came close to winning the game for the home side, only to see two efforts saved by Ruddy late on.

Norwich stay in the top 10 while Everton, yet to see their season really take off, find themselves in 14th place, four points clear of the drop-zone.