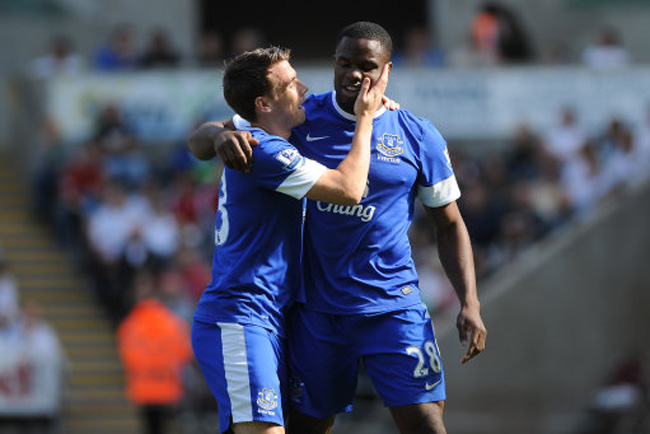 Everton totally dominated the first-half at the Liberty against a very sloppy Swansea side. Super-sub Victor Anichebe, given a start today, opened the scoring midway through the first-half after great work from the superb Marouane Fellaini. Although replays did show that the Belgian powerhouse handled the ball in the build-up to the goal.

The Toffees made it 2-0 before half-time, after Kevin Mirallas finished off (at the second-attempt) a fine cross from Steven Pienaar. However, the Swans had a couple of great chances to get something on the board before the break, but failed to convert any of their opportunities as the half ended.

Any chance Michael Laudrup’s side had of getting back in the game was well and truly buggered by the sending off of second-half sub Nathan Dyer, after just 12 minutes of play. Everton pushed for another goal and peppered Michel Vorm’s goal for the rest of the game and eventually it came, when Fellaini nodded home a Leighton Baines free-kick.