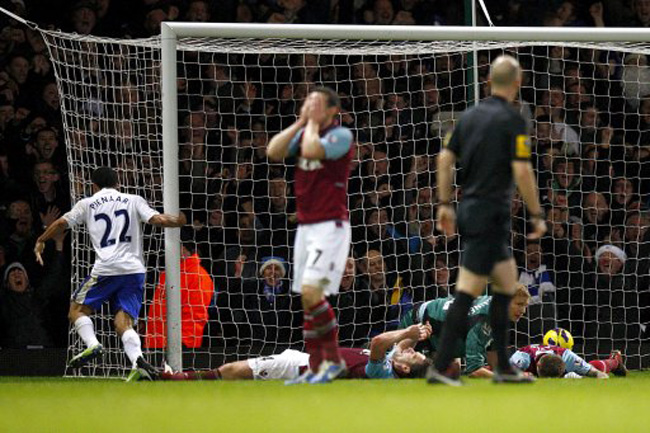 In quite a dramatic afternoon at Upton Park, David Moyes’ Everton side came from a goal down to secure a valuable win against West Ham.

Carlton Cole opened the scoring on 14 minutes with a fine strike, but only after a Leon Osman goal had been harshly disallowed by the referee’s assistant, who flagged for an apparent Victor Anichebe block on ‘keeper Jussi Jaaskelainen.

After the break, the Toffees battled their way back into the game, with Victor Anichebe levelling the scores on 64 minutes. And just two minutes later, the Hammers were dealt another blow, when Cole was sent off by referee Anthony Taylor for a high challenge on Leighton Baines, although there seemed to be absolutely no intent by Cole to get anything other than the ball.

With a man advantage, Everton then took the lead, when Steven Pienaar scrambled home the ball from close-range. However, the Merseysiders themselves then had a man sent off, when Darron Gibson saw red for another high-challenge that arguably warranted just a yellow at most.

Kevin Nolan almost bagged an equaliser at the death but ultimately it was the visitors who took all three points.

Courtesy of that result, which was achieved without the suspended Marouane Fellaini, Everton move fourth. Although manager Moyes will no doubt be concerned by another goal-shy performance from Nikica Jelavic. The Hammers, on the other hand, now find themselves in 12th.