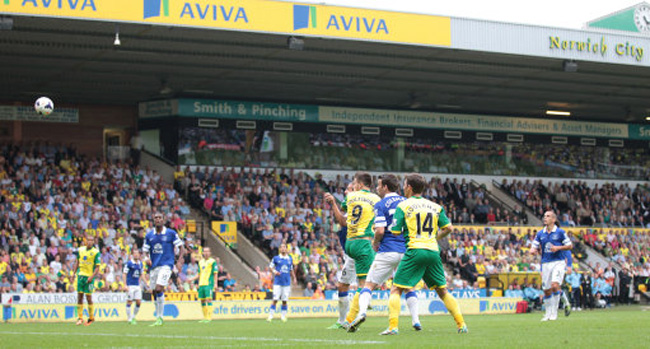 Summer-signing Ricky Van Wolfswinkel Was the hero for Norwich on Saturday, heading home the equaliser to give Chris Hughton’s side a share of the points at Carrow Road.

All the goals in this entertaining clash came in the second period, with Steven Whittaker opening the scoring early in the second-half. However, Roberto Martinez’s side were back on level terms soon after, courtesy of a fine strike from the outstanding Ross Barkley.

Irish full-back Seamus Coleman soon put Everton ahead from close-range as the Toffees looked to give their new boss an opening day victory. However. on 71 minutes, Van Wolfswinkel rose to superbly head home the fourth and final goal of the game.

Lots for both managers to be happy with from their opening day of the 2013/14 campaign.