These below be they, and by “they” we mean the three new, viable and attractive options for Everton’s club badge, rendered by an “independent design team” on the club’s behalf… 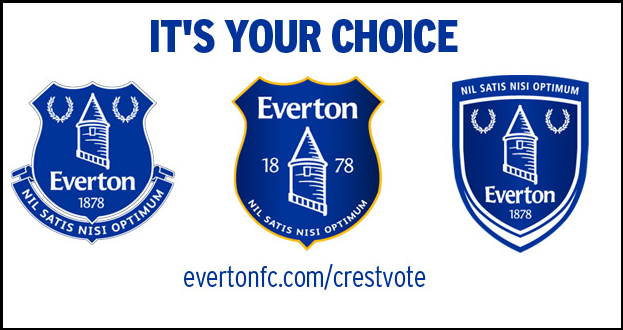 As you may remember, Toffees fans were up in arms when the club revealed their new club badge for 2013/14, with petitions being bandied around and many supporters flat-out refusing to purchase any merchandise with the new logo on it, cheifly because it made Prince Rupert’s Tower look a bit like Bilbo Baggins’ house.

Everton, being a family club, duly pandered to all the ridiculously righteous indignation and therefore set about drafting up three new designs, all distinctly more “classic” in their design, which fans can now choose between.

Voting opens at midday today over on the official Everton site and runs until midnight on Tuesday 1st October, with the winning design being revealed on the following Thursday, 3rd October.

The new club crest will then be ushered in for the beginning of the 2014/15 season.