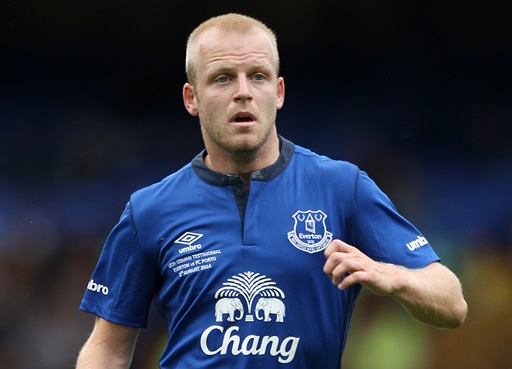 He didn’t have to but Everton forward Steven Naismith has paid a little back today by donating a clutch of Everton home tickets to Job Centres across Liverpool as a gesture of goodwill to all those who are currently out of work and seeking employment in the city.

Naismith has handed over the tickets to the people at Jobcentreplus with the idea being that they are handed out to selected individuals who actually deserve them, i.e, those who are actively seeking work.

The Scottish striker, who arrived at Goodison from Rangers in 2012, told the Independent:

“I come from Ayrshire in the West of Scotland and spent a lot of my life in Glasgow – a city that, at times, has suffered from high unemployment.

“Liverpool has a similar history and I am aware that, through no fault of their own, there are many unemployed in Liverpool trying hard to find a job and may not be able to afford a ticket.

“I thought this might be a small gesture to help those in that situation to enjoy a day out at one of our league matches. Hopefully it can bring some joy to many people.

“I have asked the Jobcentreplus if they could give the tickets to different job centres across the city each week and select people who are unemployed through no fault of their own, are trying hard to find employment and who would enjoy watching a Premier League football match.

“Every day I feel very fortunate for the opportunities and lifestyle my job as a footballer has afforded my family and me and also to be in the position where I can help the community in some small way.”

This isn’t the first charitable venture Naismith has made, with the Scotland international also previously launching a project in Glasgow to care for injured members of the armed services as well as publicly lending his support to a homeless charity in Liverpool and signing up as an ambassador for the Dyslexia Scotland campaign.