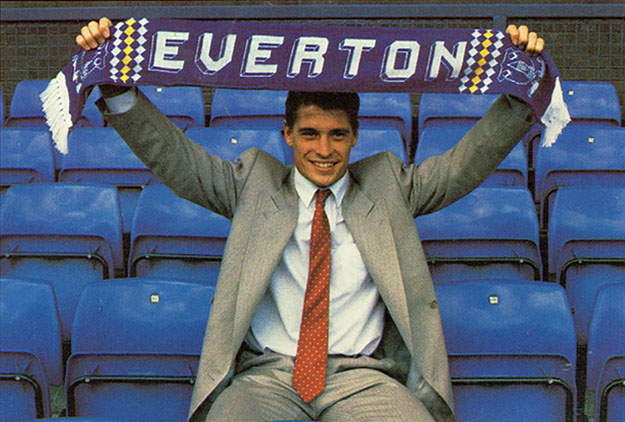 Back in the days before Evertonians flew planes over football grounds demanding more ambition from their board, the Toffees top brass kept the fans sweet by lashing out £2.2million on West Ham striker Tony Cottee – the most expensive purchase ever made by a British club at the time.

On his debut on the opening day of the 1988/89 season, Cottee netted after 34 seconds and went on to score a hat-trick in a 4-0 home romp over Newcastle United.

Cottee finished the season on 14 goals, and Everton finished a disappointing eighth, although they did reach the FA Cup final – losing 3-2 to local rivals Liverpool.

Cottee went on to play alongside Peter Beardsley and Mo Johnstone in the six years and 184 appearances he made for the Blues – scoring 72 goals before being transferred back to West Ham in 1994 in a part-exchange deal involving David Burrows.

Now retired, Cottee has admitted he has a scrapbook containing clippings of every one of the 239 goals he scored during his career.