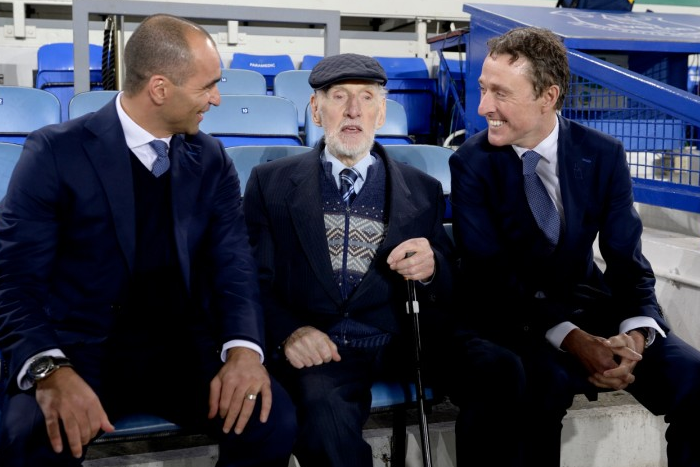 Anybody born with the ancient Navajo gift of hawk-sight may well have spotted an unusual face sat on the Everton bench during the 1-1 draw with Crystal Palace on Monday evening.

That face belongs to 89-year-old Peter Owens, a lifelong Toffees fan who gratefully accepted an invitation from Roberto Martinez to watch the match alongside him in appreciation for his decades of loyal support.

Owens began following Everton as a boy during the 1930s after witnessing Dixie Dean in action and has been a regular face at Goodison Park ever since, even buying shares in his beloved club several years ago.

As such, the elder statesman was in attendance at a recent General Meeting during which he asked Everton chief executive Robert Elstone about the possibility of the club installing a lift for him to reach his seat in the upper tier.

While Elstone was unfortunately unable to grant the request, he was suitably charmed by Owens’ commitment to the cause that he saw fit to liaise with Martinez about the possibility of having the elderly fan watch the Palace game from the best seat in the house.

“We wanted to recognise Peter’s incredible passion for the club and the fact that he has been coming to Goodison and supporting the team for more than 80 years,” Martinez told the Liverpool Echo.

“He has accumulated many fantastic memories from supporting the team over the years and it’s nice to be able to leave him with one more.

“Evertonians are truly special supporters and Peter is a great example to us all of that level of dedication. Just inspirational.”

Hear hear. Another heart-warming gesture from a club renowned for looking after their extended family.