A year after finding themselves bottom of the Premier League table for Christmas, Claudio Ranieri’s upwardly mobile Leicester City will top the very same table on the 25th this time around, after an entertaining win at Goodison Park. 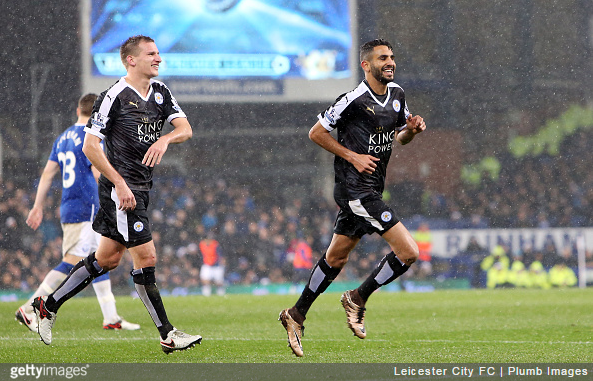 Once again it was the deadly duo of Jamie Vardy and Riyad Mahrez who would inspire the win, with the latter opening the scoring in the first-half after Shinji Okazaki was fouled in the box by Ramiro Funes Mori. Another in-form attacker, Romelu Lukaku, levelled the scores on 32 minutes with the Belgian netting in his seventh successive top-flight game for the Toffees.

The Foxes were their usual effervescent selves throughout the game and they eventually doubled their advantage just after the hour-mark, with Mahrez converting his second spot-kick of the game after Vardy had been felled by ‘keeper Tim Howard. Speedy striker Vardy then set up Okazaki to increase the visitors lead on 69 minutes as Everton struggled to contain their opponent’s pace on the break. A late goal from sub Kevin Mirallas made things interesting at the death, but ultimately Leicester would hold on as their incredible campaign rolls on.

Roberto Martinez’s Everton stay in disappointing mid-table, some six points of a European place. As for Leicester, they find themselves five points clear at the top of the table, at least until Sunday, with their top ranking for Christmas Day confirmed. The question remains, however, can they sustain this incredible form into the second-half of the season and genuinely challenge for the title in May?