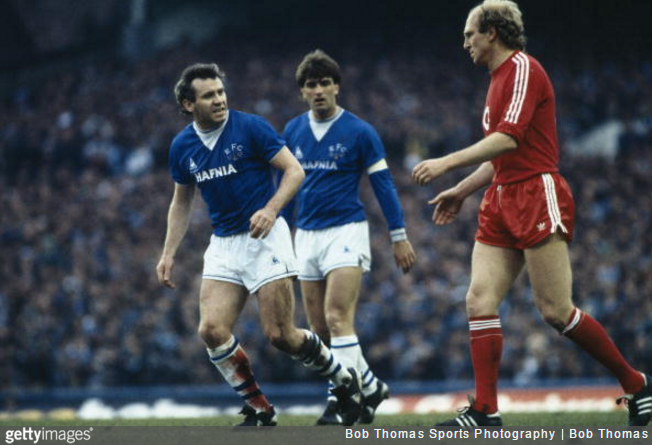 In direct contrast to the general mood permeating Goodison at the moment, back in 1985, Everton pulled off one of the greatest upsets in the club’s history by roaring back from behind to beat none other than Bayern Munich.

It proved to be truly memorable night on Merseyside when arguably the finest Everton team ever assembled came from 1-0 down to beat Bayern 3-1 in a Cup Winners’ Cup semi-final second leg.

The first leg in Bavaria had ended scoreless, and when Bayern striker Dieter Hoeness threaded the visitors ahead in the 37th minute things immediately began looking – if you’ll excuse the pun – sticky for the Toffees.

At half-time, manager Howard Kendall allegedly told his players: “Just kick towards the Gwladys Street end, the fans will suck it into the goal.”

Sure enough, Graeme Sharp equalised two minutes after the restart. Andy Gray then put the home side ahead with 73 minutes gone, bundling home a long-throw from less than a yard out before combining well with Trevor Steven, who rounded things off with the third goal in the 87th minute.

The Germans were miffed at what they saw as a overly physical approach, with coach Udo Lattek saying: “This was not football, Mr Kendall”, but while Kendal admitted the plan had been to put the Germans under relentless pressure from the off, it’s undeniable that his team could play a bit too.

It’s not like a few of the Everton players didn’t sustain their fair share of knocks and gouges either, as this rather gruesome photo of Peter Reid’s blood-soaked sock duly attests…

Everton won the league title that season, winning the league and FA Cup double the season before, and went on to win the Cup Winners’ Cup Final in front of 25,000 travelling fans in Rotterdam which they duly won thanks to a famous 3-1 victory over Rapid Vienna – Gray and Steven both on the scoresheet again.

The Bayern tie doesn’t seem all that long ago to the masses of ‘mature’ Evertonians who still regard it as the greatest night at Goodison.

However, rather soberingly, it was 31 years yesterday since it happened. Christ. Where does the time go?