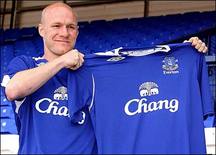 What has Everton boss David Moyes done to piss off West Ham Utd? Moyes has been forced to publicly rubbish claims that star striker Andrew Johnson will be tempted to Upton Park for around a Â£13m fee: ‘AJ was a top player at Everton last season and he will be again next seasonâ€¦ The West Ham consortium wouldn’t have enough money to buy Johnson or any other Everton playerâ€¦ and for them to think they could shows a real lack of understanding of our game.’
I understand Moyes’ defensiveness. After all, Everton finished way above West Ham last season and why would they want to sell arguably their three best players to a rival? (The Hammers have also been linked with Everton midfielders Mikel Arteta and Tim Cahill recently.)