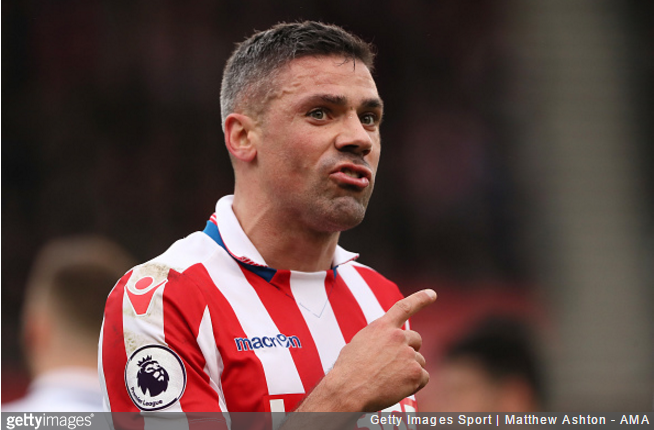 Proving once again that he’s a decent sort, Jon Walters quite literally stopped in his tracks this week to donate money to one of Everton’s most… shall we say “instantly recognisable” fans.

Michael Cullen, better known as Speedo Mick, is once again out there traipsing along the highways and byways of England while wearing next to nothing in a bid to raise money for charity.

Indeed, Mick managed to raise more than £50,000 for the Woodlands Hospice in Liverpool last year by walking to every single Everton match in his trunks.

This time round, he’s schlepped from Buckingham Palace to Anfield in time for tomorrow’s Merseyside Derby to raise £10,000 for the Charlie’s Chance Foundation.

And lo, as Mick trampled his way through Cheshire, he was spotted by Walters, who promptly pulled over in his car and donated £50 to the cause right there and then…

Big shout out to @JonWalters19 of @stokecity for stopping and donating £50, #not to big for his boots, #Trueblue an All @Charlieschance pic.twitter.com/TZOKbGIXob

Oddly, it looks as though Walters was far more excited to stumble across a bloke in his waterproof undercrackers than Mick was of meeting a Premier League footballer…

Driving past and had to stop to see this legend @speedomick what an effort…and has definitely got better gear than me! pic.twitter.com/zBcMMxq0aE

Should you wish to donate to Speedo Mick’s crowdfunding campaign, the requisite JustGiving page is here.