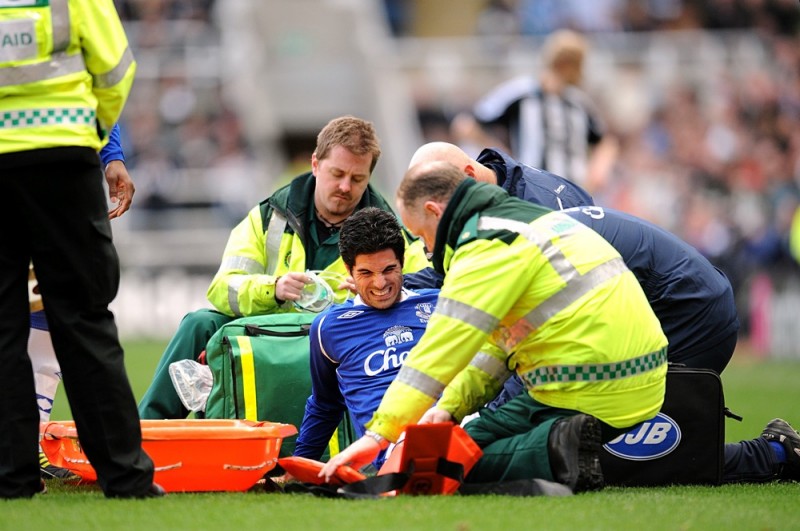 The main reason for Everton’s patchy start to the new season can be explained in three words: No Mikel Arteta.

It’s difficult to overstate just how important the Spaniard is to the balance of David Moyes’ team. He is the artist in a team full of (admirable) artisans, and his absence has hurt Everton badly, just as Xabi Alonso’s absence has hurt Liverpool.

Anyway, bad news this morning for Evertonians: Arteta has suffered a setback in his recovery from the cruciate knee injury he suffered against Newcastle in February ’09 (see photo).

According to Press Association Sport, he was expected to step up his rehabilitation in November but he has suffered an infection in the injury, post-surgery.

Moyes said: “We have had to wash out the knee. It is a setback but I cannot say for how long.”

Looks like Arteta might not be playing again until the 2010. Such a shame, for him and all Everton fans. And as a neutral, I miss watching him play too.

In other bad Everton news – it’s all there seems to be right now – Tim Cahill has been called up by Australia to face Oman in a 2011 Asian Cup qualifier on November 14. David Moyes really, really doesn’t want Cahill to play, so it will be interesting to see if the player does indeed travel.