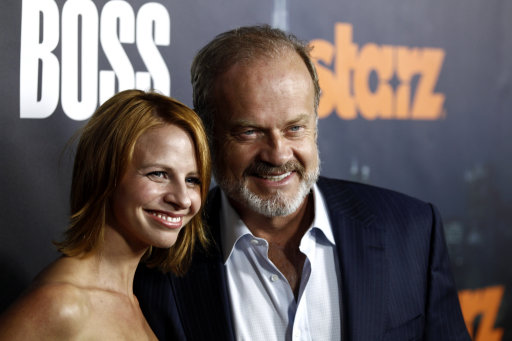 Ebbsfleet United of the Conference are hoping to pull a bit of a celebrity coup this weekend in attracting a veritable star of screen and stage to their FA Cup first-round fixture against Carlisle.

Ebbsfleet striker Phil Walsh is the brother of actress Kayte Walsh (pictured above) and therefore the brother-in-law of Kelsey Grammer, of ‘Cheers’, ‘Frasier’ and ‘Sideshow Bob’ fame, who Walsh hopes to entice into spend his Saturday freezing his clackers off at Brunton Park with the lure of end-to-end football and a chicken balti pie at half-time.

Grammer is in the UK for a family funeral in Hartlepool the day before the game, and 28-year-old Phil is hopeful he’ll be persuaded to take in the game on Saturday afternoon, telling The Sun:

“Kelsey and my sister will be at the funeral for my grandma Margaret and I’ll join them there before catching up with the rest of the team at our Penrith hotel.

“My grandma was a big influence on our lives and Kayte and Kelsey are coming over from Los Angeles. I’m hoping Kelsey will then be able to come up to Carlisle and watch me play. I shall leave some tickets out for them and it’ll be nice to have some family support.

“I’ve spoken to Kelsey about football and know he enjoys the game. As a boy he played. His game is baseball now but if he knows I’m playing he might be able to make the journey.”

Reports that Bishop’s Stortford are planning to upstage Ebbsfleet by inviting Kenan & Kel along to their FA Cup fixture against Hastings on the same day are yet to be confirmed.