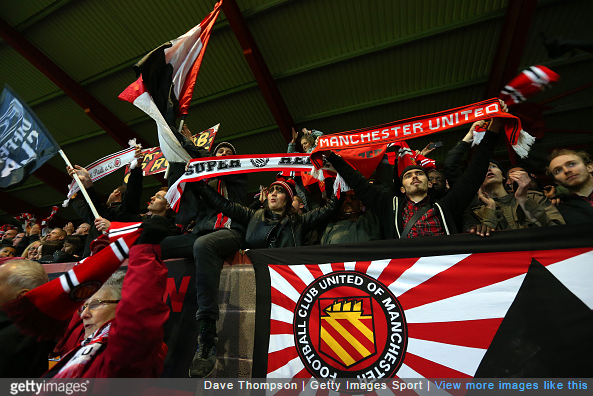 FC United of Manchester have found themselves embroiled in a quibble with the FA after the powers that be demanded their upcoming showpiece FA Cup first round tie against Chesterfield be moved to suit the television schedule.

The club originally put up a spirited fight when the FA declared that kick-off would be moved from Saturday afternoon to 7:45pm on Monday 9th November so the game could be shown live on BT Sport.

FC United were unwilling to switch from a traditional kick-off time as they felt that rescheduling for TV would prove “inconvenient to fans and detrimental to the match-day atmosphere”.

However, the FA flexed their institutional muscle and eventually had their way, effectively forcing FC United to comply – also informing the National League North side that competition rules state they have to charge fans a minimum of £10 to get in, the normal price of admission at Broadhurst Park being £9.

Not to be quashed entirely, the FC United board came up with a cunning plan to prevent their supporters from feeling the lash of the FA’s whip.

According to a statement issued on their official website, the club are planning to get around the enforced price hike by reimbursing every fan (both home and away) to the tune of £1.

FC United’s usual price is £9. If the minimum adult price of £10 is applied, FC United will be issuing a £1 voucher to all adult ticket holders that they can spend on food and drink or merchandise at the ground.

This offer will be extended to away supporters. FC United will pick up this cost and this will not affect the division of gate receipts with Chesterfield FC.

Yeah, f**k the man – though the estimated £67,500 television windfall and potential £18,500 winning prize pot will probably help smooth things over too.