The draw for the third round of the FA Cup was made at the Sport Wales National Centre on Monday evening, with former Welsh international John Hartson and England Womens’ team boss (and Welshman) Mark Sampson.

Very few standout clashes were thrown up, however, with cup-holders Arsenal will face Sunderland at the Emirates, a side they beat 3-1 at the weekend. Other all-top-flight ties see Norwich City host Manchester City, Tottenham face high-flyers Leicester City, Watford clash with Newcastle United at Vicarage Road and Crystal Palace travel to Southampton.

As for the remaining non-league sides, a trip to Everton lies ahead for Whitehawk if they can beat Dagenham & Redbridge in their 2nd round replay on the south coast. Eastleigh host Championship strugglers Bolton Wanderers while Salford City will face Derby County, if they can get past a replay fixture with Hartepool United. 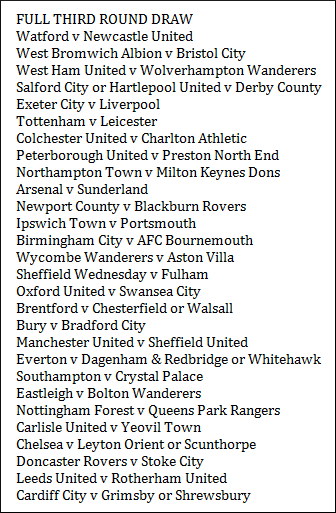