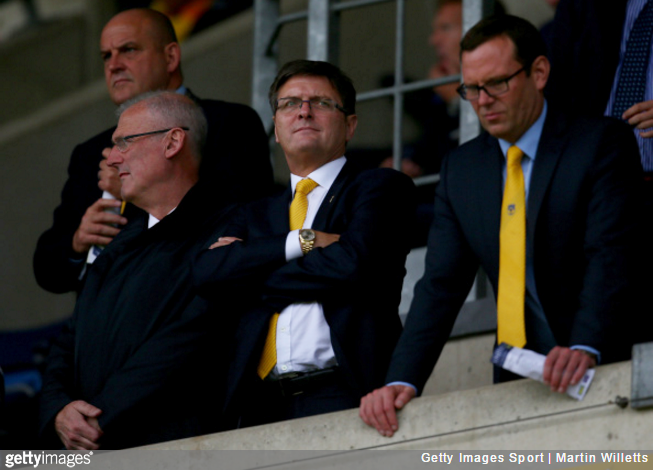 Having made it through four preliminary rounds to get there, non-league Merstham had their FA Cup dreams ended by Oxford United in the first round proper on Saturday evening.

Hailing from the Isthmian League Presmier Division (the seventh tier of English football), Merstham made a decent fist of their debut first round appearance in front on a home crowd of 1,920 – about ten times their usual home attendance.

Alas, the plucky minnows were eventually bowled over by their League One opponents, who went on to win 5-0.

However, Oxford United chairman Darryl Eales (central in the photo above) was so impressed by Merstham’s wholehearted approach to the game that he has seen fit to donate his club’s portion of the gate receipts back to Merstham as an act of “footballing goodwill”.

The spirit of goodwill in football needs to be enhanced. It’s the least we could do.

Sometimes you have to look at the bigger picture and one of my pleas to the Premier League is that football at every level needs financing.

It’s not as if Oxford is flush with cash. But, we keep talking about the Whole Game Solution and the Premier League need to understand that football at every level supports the pyramid.

The disproportionate share of the Premier League’s cut of the cake is something that needs to be looked at.

As the game was televised on BT Sport, both clubs received a match broadcast fee of £67, 500, while Oxford also earned a further £18,000 for making it through to the second round.

@OUFCOfficial Great away supporters helped to create a fab occasion….. Thank-you! Classy gesture by the Oxford board too #allwinners

Now that’s the real magic of the FA Cup.