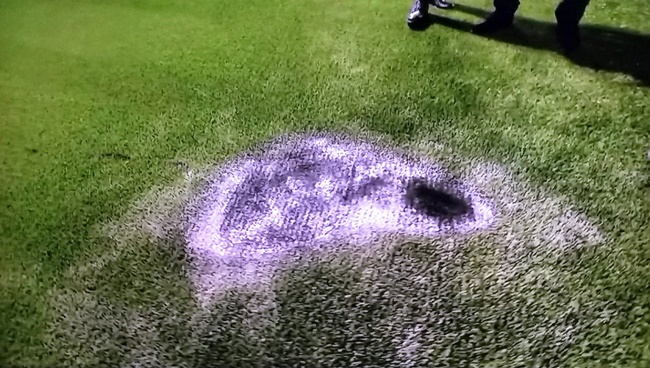 Image: Who Ate All The Pies/BBC Sport

Hyde United have thanked MK Dons fans for their “fantastic” generosity after they pitched in to help pay off the enormous bill incurred when a flare set fire to the non-league club’s pitch before last week’s FA Cup first round match.

BBC cameras caught the damage caused by the flare, which scorched the surface and burnt a hole right through Hyde’s artificial pitch  literally minutes before the game at Ewen Fields was due to kick off.

The upshot is that the seventh-tier side now have to find £12,500 to get it patched up before next Saturday’s National League North home fixture against Ossett Albion.

However, the coffers will be boosted by a donation from MK Dons fan forum AFC The Concrete Roundabout, who have set up a crowdfunding campaign to help ease the financial burden.

The MK Dons supporters in question are attempting to raise £1,000 to help offset Hyde’s repair bill, despite the flare being hurled onto the pitch by a home fan.

It’s a fantastic gesture. The MK Dons fans were brilliant on the night and it’s great that they have started this fund, which is a big help.

Thanks to their cup run, the Tigers have already earned more revenue in three months this season that they did in the entire 2016/17 campaign – money that is being earmarked to cover a raft of improvements at their ground as well as a few community projects.

The repair work will cost £12,500 and that is money that was not budgeted for.

Since we went fan-owned there are a large number of jobs that need doing on the ground.

The stands have not been painted for six years, there are seats that need replacing and the toilets need some attention too.

We are also now running a ladies team, Tameside United Ladies, and at present there are no changing rooms or toilet facilities for them.

According to the MEN, the pitch rescue is already well underway, with specialist materials being shipped in from The Netherlands as we speak.

Hyde have also reported the flare incident to the police and are seeking to have the person responsible banned from their ground for life.

A rare bit of positive PR for MK Dons, eh? How about that.