Premier League leaders Manchester City will travel to Wigan Athletic in the fifth round of the FA Cup, a repeat of the 2013 final which saw the Latics win 1-0.

Overall, the draw for the fifth round failed to throw up any particularly mouth-watering ties, with Manchester United travelling to Huddersfield (if they beat Birmingham) and Chelsea hosting Hull City.

Elsewhere, if Tottenham can overcome League Two Newport County at Wembley in their fourth round reply, they’ll travel to either Championship side Millwall or League One Rochdale. 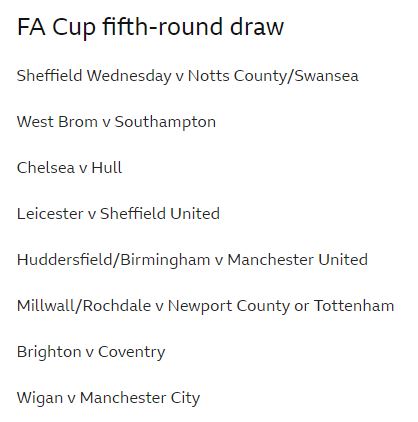 The draw was made during BBC’s The One Show, and it was a rather cringey affair, with opposing fans made to shake hands with each other.

The draw has taken place for the next round of the #FACup. Happy with the result? Watch the clip to see who is playing who… ⚽️ ⚽️ ⚽️ #TheOneShow pic.twitter.com/WWKwYfxTCN

We can think of more than one hand gesture which would accurately sum this up.